New York State legislators Ellen Jaffee and Liz Krueger have called on the Department of Health to impose the maximum allowable amounts of PFOA, PFOS and 1,4-dioxane in drinking water.

Separate letters were sent to Howard Zucker, the DOH’s Commissioner, by the three legislators asking for mandatory levels of 4 parts per trillion for PFOA and PFOS and 0.3 parts per billion for 1,4-dioxane.

Ellen Jaffee, a Rockland County Democrat, wrote that the Drinking Water Quality Council had failed to be, “the champion for clean water that New York needs.”

The Drinking Water Quality Council, which was created in September 2017 and consists of twelve members, was given the responsibility to make recommendations for maximum contamination levels for PFOA, PFOS and 1,4-dioxane in drinking water by the end of September, which they were unable to do.

“New Yorkers cannot wait any longer to have their drinking water protected from these dangerous chemicals,” wrote Liz Krueger, a Manhattan Democrat.

“To meet this important goal, DOH must take immediate action to establish MCLs for these chemicals,” she wrote. “Your leadership will be of critical importance to ensure that when New Yorkers turn on their taps, they can rest assured that their water is clean and safe to drink.”

Click here to read the letters written to the Department of Health. 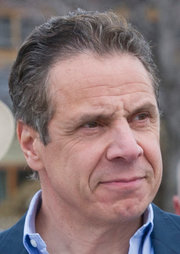 Governor Andrew M. Cuomo visited Hoosick Falls, NY on Sunday and announced that a new filtration system in the town has successfully eliminated PFOA from the municipal water supply.

At a command center set up in Hoosick Falls by the Department of Environmental Conservation, Cuomo announced, “The PFOA is out of the water.”

Nevertheless, state officials are still warning Hoosick residents not to use tap water for consumption until a complete flush of the water system has been conducted.

Cuomo also discussed several permanent solutions that are being considered, which include using water from the Hoosic River, increasing the capacity of a village well that has lower levels of PFOA, or using a reservoir about 12 miles away.

The state aims to have the new system delivering clean tap water by next week.

Residents of Hoosick Falls and other communities who believe they may have been impacted by the PFOA water contamination are encouraged to submit a contact form. During a press conference on Wednesday, Cuomo Administration officials announced that the state will declare the polluted water of Hoosick Falls a Superfund site, allowing the state to investigate the extent of any contamination and to begin remediation immediately.

The Department of Environmental Conservation on Wednesday issued an emergency regulation that will allow the state to list perfluorooctanoic acid (PFOA), which has been linked to cancer and may have polluted the Hoosick Falls water supply, as a hazardous substance.

The Department of Health will initiate a health-risk analysis, install filtration systems at schools and other community gathering places and develop a state telephone hotline for health information, state Health Commissioner Dr. Howard Zucker said at the conference. Blood testing of community members will begin in mid-February.

Zucker said the state will also revise the level of PFOA in water that it considers safe. The state currently considers a PFOA level in water safe as long as it is below 50,000 parts per trillion. That number is dramatically above the federal recommendation of 400 parts per trillion. Zucker said the state will set a new level within the next few weeks.

Residents of Hoosick Falls, a Rensselaer County community, first raised questions about the polluted water more than a year ago, when the village began to see elevated levels of unusual types of cancers and other medical conditions consistent with unhealthy PFOA levels. State officials learned about the pollution in late 2014, but did not conduct testing until July 2015, Zucker acknowledged.

Shortly after being informed of the situation this fall, the EPA Region 2 Administrator Judith Enck took prompt action and federal regulators issued the warning about drinking.

“These actions will ensure that the source and extent of PFOA contamination is identified, and all necessary steps are taken to swiftly address the chemical’s presence,” Cuomo said in a statement. “My administration is investigating this situation fully, and we will do whatever is necessary to ensure safe, clean drinking water for local residents.”

For decades, the Saint-Gobain factory in Hoosick Falls produced Teflon-coated materials that the EPA says may have polluted the village water supply with PFOA, a toxic chemical that is used in non-stick cookware, stain-resistant carpets and packaging. The EPA is investigating whether that chemical may have seeped into village wells when workers cleaned smokestack filters and other equipment at the factory, which Saint-Gobain has owned since 1999. Other factories in town may also used the chemical and its exact source has not yet been pinpointed.

The state’s inaction for more than a year caused more people to be exposed to PFOA, said Michael Hickey, a town resident who used his own money to discover the PFOA levels in the town’s water. After his father’s death from cancer, Hickey took his own water samples from sources around town and sent them to a lab out of state that confirmed elevated levels of PFOA.

Residents of Hoosick Falls and other communities who believe they may have been impacted are encouraged to contact Stephen G. Schwarz at (585) 325-5150 or to complete a water contamination contact form. You may also contact us here.